While I was always aware of the fact that regular expressions (regex) are a very powerful search-and-replace tool, I hardly ever used them in practice. For my humble needs, the built-in search-and-replace tool of my favorite text editor Geany is more than sufficient. From time to time, when I run into complex cases, I usually write a small Python script.

This morning, while converting old Dokuwiki-shownotes pages from my podcast into markdown format, I finally gave in: I wanted to solve a task using regular expressions.

The task was already solved inside a larger hand-written python script of mine, but I thought it would be nice to have a singular regex string that I can copy/paste into the search-replace dialog of Geany.

The task is this one:

convert a hyperlink from dokuwiki's format into markdown format.

And yes, I am aware of the fact that the tool pandoc can make those conversions, among many other things.

To break the task down into it's single steps:

Because of Geany's ability to accept regex strings inside it's search-and-replace dialog, I was able to test my regex expressions until I got the desired results. I referred to this colorful regex-tutorial site that for some reason showed up on top of my google search list: * https://www.regular-expressions.info/backref.html

I first learned that in regex, some chars like the parentheses have a special meaning and need to be escaped with an leading backslash (\).

To search for an double-opening square bracket, the searchstring is therefore not [[ but instead:

My next problem was to search for the url. Some url's in my text were modern (https:\\) and some were old (http:\\). Regex provide an trailing ? operator to indicate that the previous char must occur zero or one time. I therefore modified my searchstring into:

This would find all occurrences of http:// as well as all those of https://. Strangely, the dash (/) is not a special character inside regex and does not need to be escaped.

The next sub-task was to find the pipe symbol (|). The url's inside the document have of course various length, so I needed an undefined number of any characters. According to the regex documentation I consulted, this should be possible by using either the \w or the dot but none of those worked for me satisfactory. I either got no search result at all or far too much.

The solution that worked for me was to tell regex: //take any number of chars that are NOT the pipe//. The pipe need to be escaped with an backslash, the NOT is done by an leading ^ char and for the "any number" to work the whole thing has to be inside square brackets, followed by an star. My regex searchstring grows into:

Now comes the pipe symbol itself. Of course, escaped:

Reflecting on those cryptic symbols, it dawned on me that why I did not really missed regex for the last 51 years in my life.

Finally, I search for the double square brackets of the search-string, by using escaping twice:

While writing this down, it all seems to be very straight forward, but in fact it took my some time, reading in Byzantine documentation websites and much trial-and-error.

While Geany now happily found all the search strings, I needed a way to create an regex string for the replace-string. 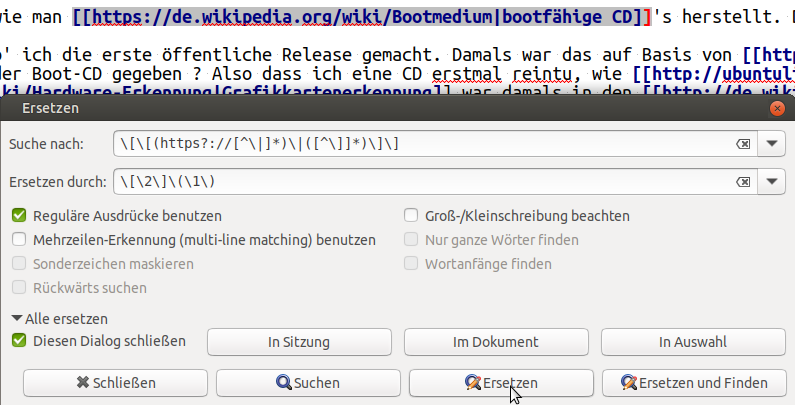